This presentation was written by conference host Tom Kuster based on interviews and information from the teachers involved, who prefer not to be identified for security reasons.

Click here to go directly to English translation below. 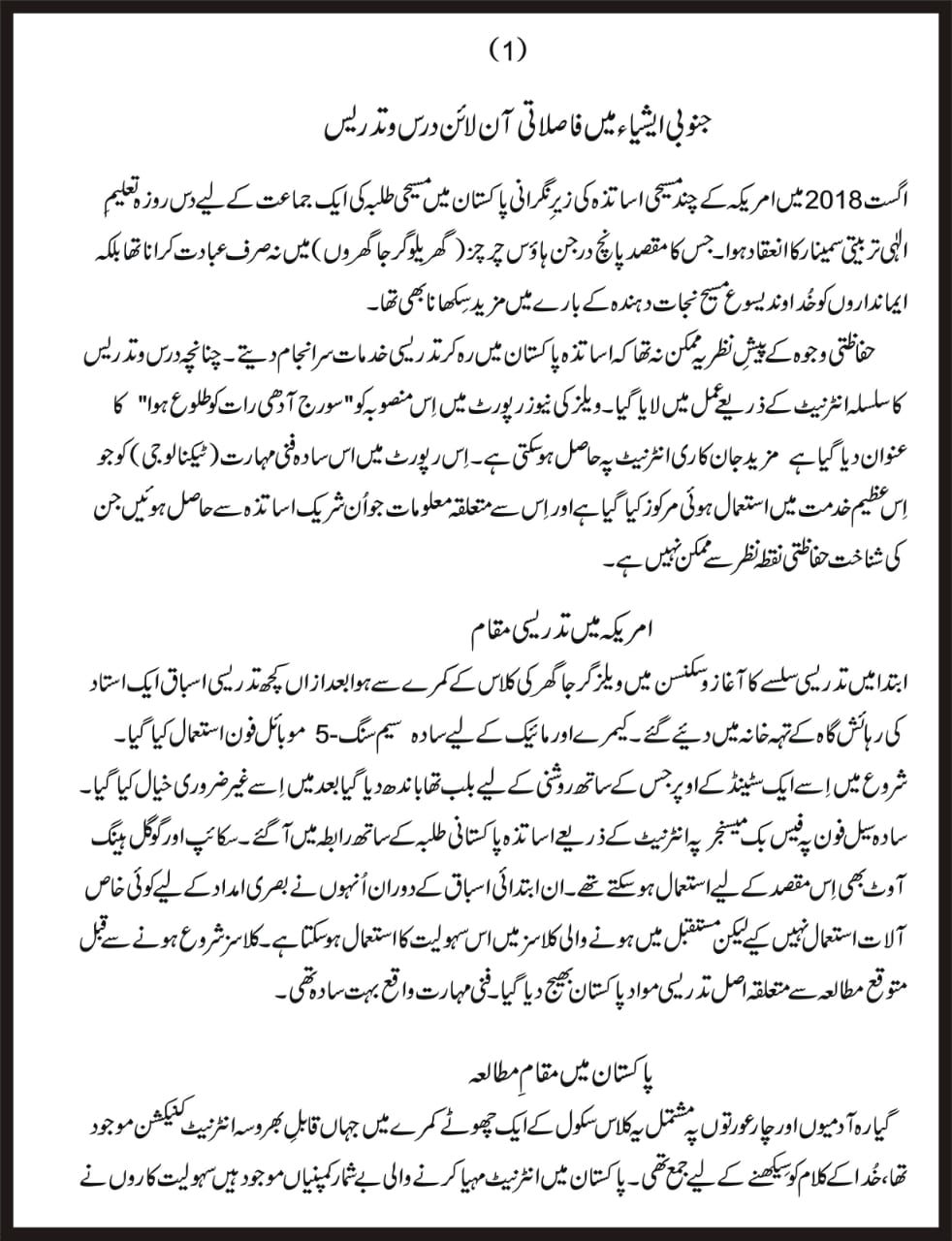 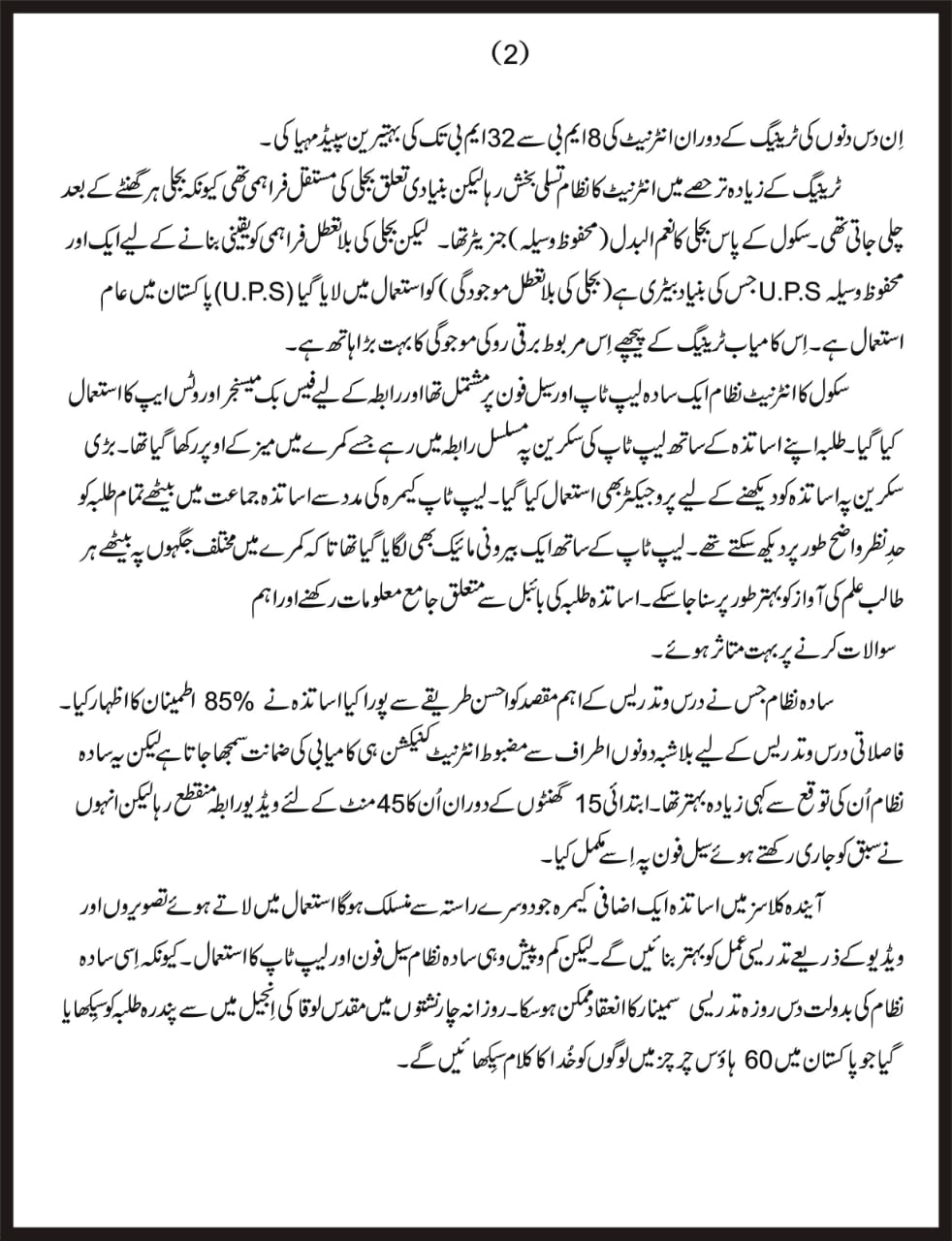 For ten days in August 2018, instructors in the United States met with a group of students in Pakistan in an intensive Bible workshop designed to train leaders to serve some five dozen house churches in which believers are worshipping and learning more about their Savior.

For security reasons, the instructors could not be physically present with the students. The Bible workshop had to be conducted via technology at a distance. The project was described in a news report on WELSnet entitled "The Sun Came Out At Midnight" and you can read more about it there. This report focuses on the technology that is being used in this important venture, with information obtained from those involved in the teaching who will not be identified here because of the same security concerns.

The teaching location in the USA 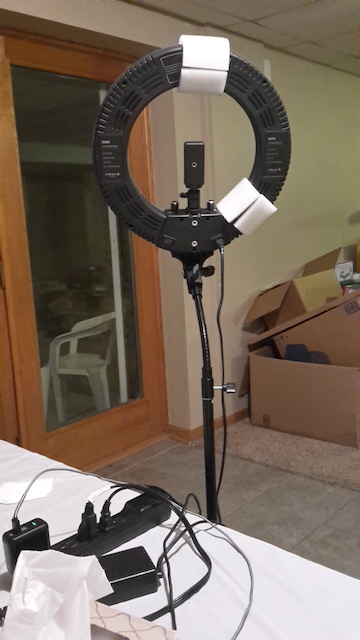 Cell phone was mounted inside
light for transmitting lessons

Teaching began from a classroom at a WELS church in Wisconsin — later some sessions were conducted from a basement room in the house of one of the teachers. The camera and microphone were both simply a Samsung Note 5 cell phone. At first it was mounted on a stand with a halo light enhancing the lighting, but later this was considered unnecessary. The phone connected with the classroom in Pakistan over the internet using Facebook Messenger. The teachers believe that Google Hangouts or Skype could work as well. In these first classes they did not use any special equipment for presenting visual material, although they might add that capability in the future. Master pages of worksheets and study materials were sent to Pakistan in advance and printed there.

The learning location in Pakistan

The class of eleven men and four women gathered in a small room at a school, a place with a reasonably reliable internet connection. A number of providers in Pakistan supply internet connections. The provider they used upgraded internet speed at the school from 8 MB to 32 MB for the duration of the ten-day class.

While the internet connection proved reliable for the most part, a more basic concern was the electrical power supply. Typically the electricity goes off at least once every hour. The school has a back-up generator that was used, but a preferred back-up came from a UPS (Uninterruptible Power Supply) battery-based system commonly used in Pakistan. This combination provided a stable supply of power to support the Bible class project.

Their internet technology consisted of a simple laptop computer running Facebook Messenger, supplemented by an Android cell phone using WhatsApp. While students could view the teachers on the screen of the laptop set up on a table in front of the room, they also used a projector to view them on a larger screen. The camera in the laptop made the class visible to the teachers at the other end. An external microphone was attached to the laptop since it was important to pick up better audio from the students who spoke from various locations around the room. The teachers were encouraged by the amount of feedback and questions coming from the students during the lessons.

This simple system served its purpose well — the teachers rate their satisfaction with the technology at 85%. Key to success, of course, is a strong internet connection at both ends, and this worked for them better than they expected. During their first 15 hours of teaching, they lost video for only 45 minutes — and then they carried on the lessons by switching to the phone.

In future sessions, the teachers are thinking about improving their ability to show pictures and graphics, perhaps through the use of an additional camera connected through a second channel. But in general, the same simple setup — cell phone at one end to laptop at the other — will be the essence of the system that enabled a ten-day, four-sessions-a-day study of Luke's Gospel, training 15 leaders to serve some five dozen house churches in Pakistan. 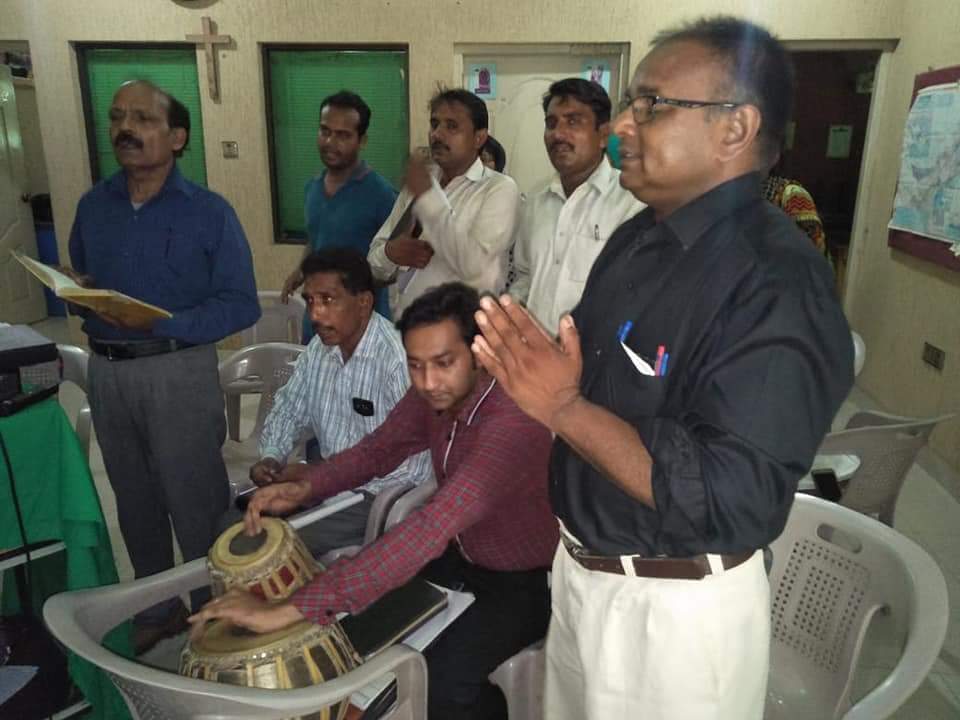 Lessons open with worship and song, accompanied by the tabla (traditional percussion instrument) and a harmonium 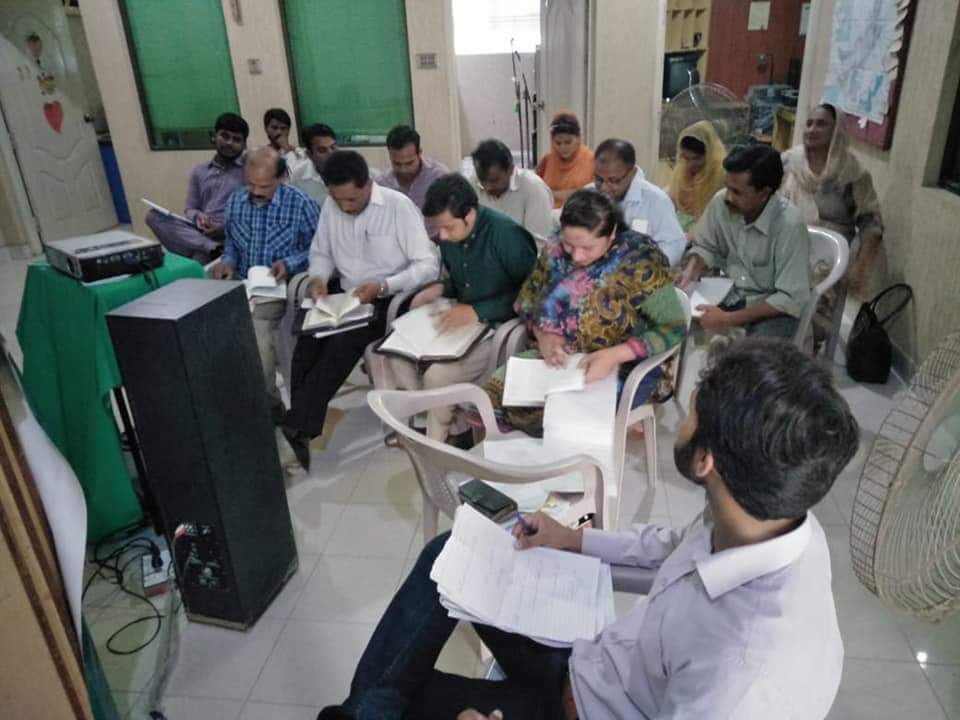 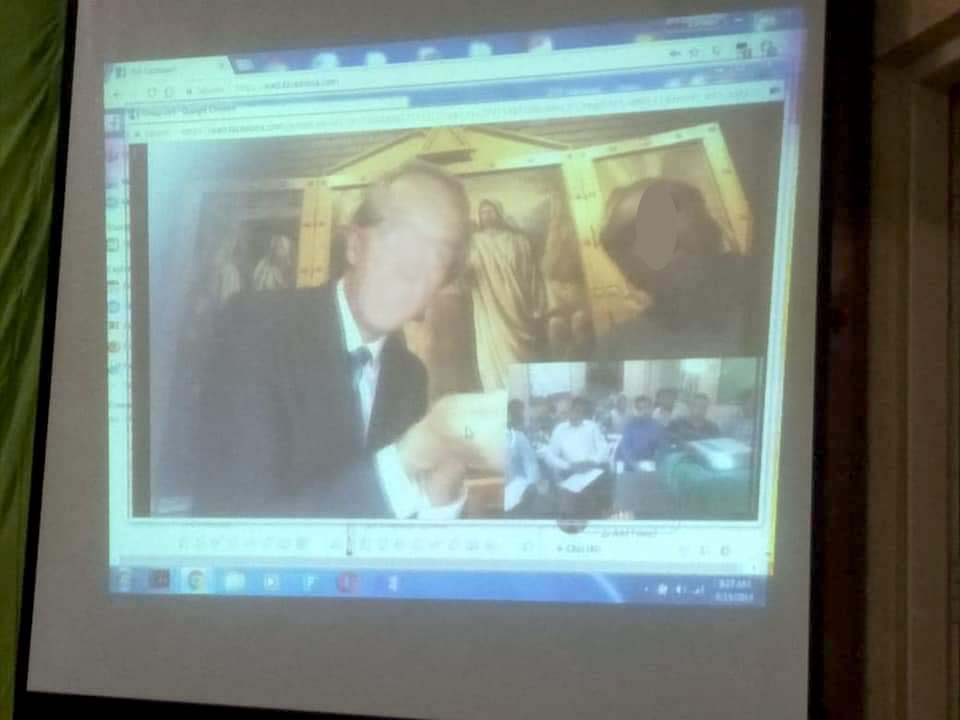 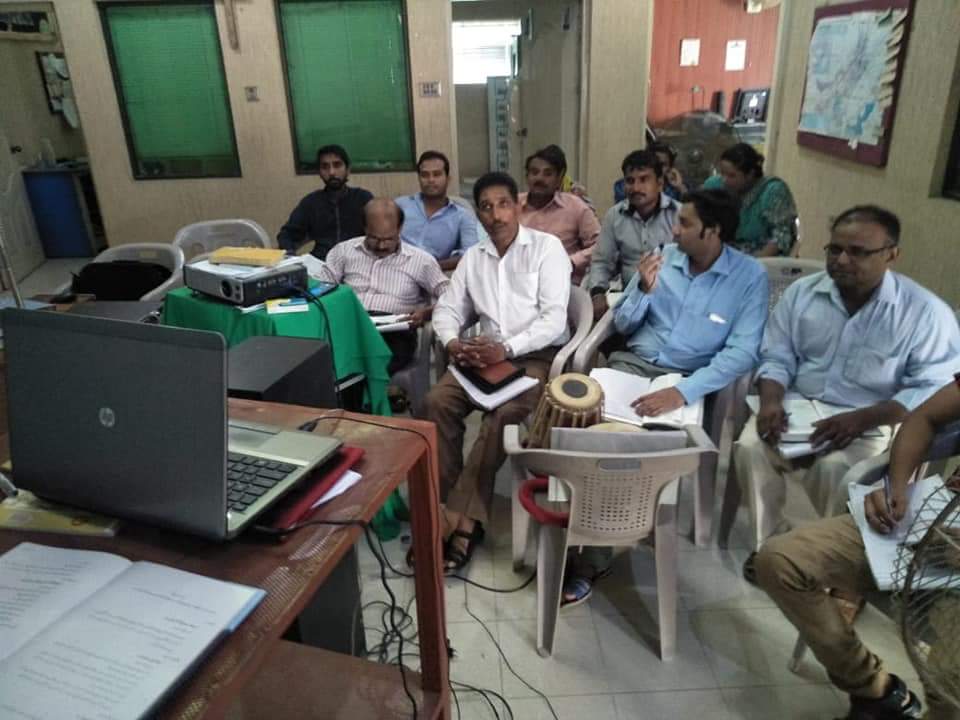 Laptop is center of classroom attention 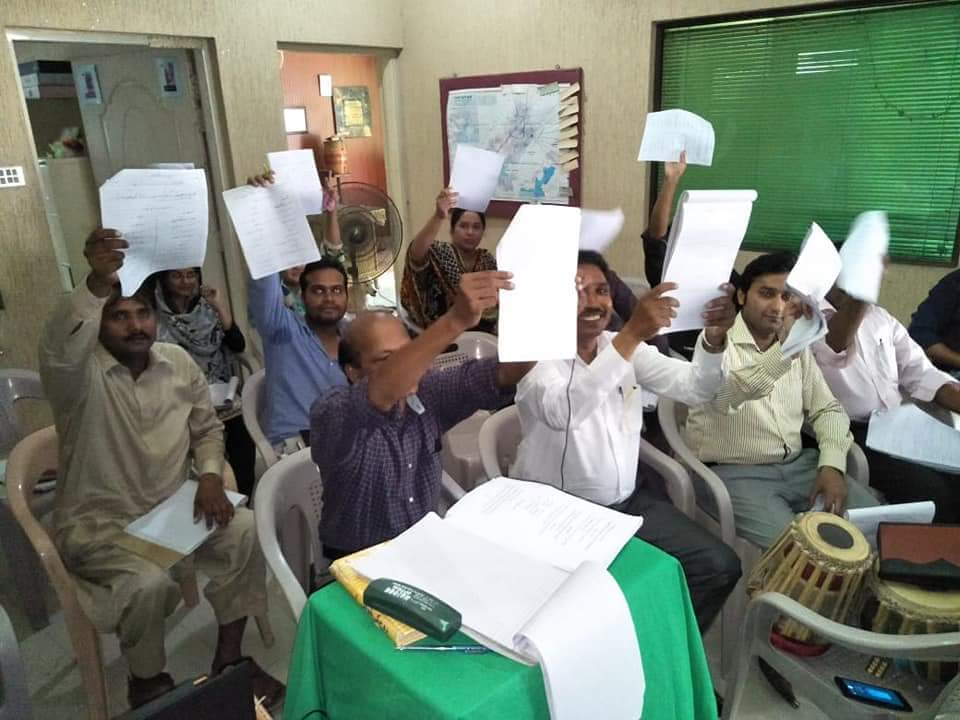 Students show their work to teachers thousands of miles away 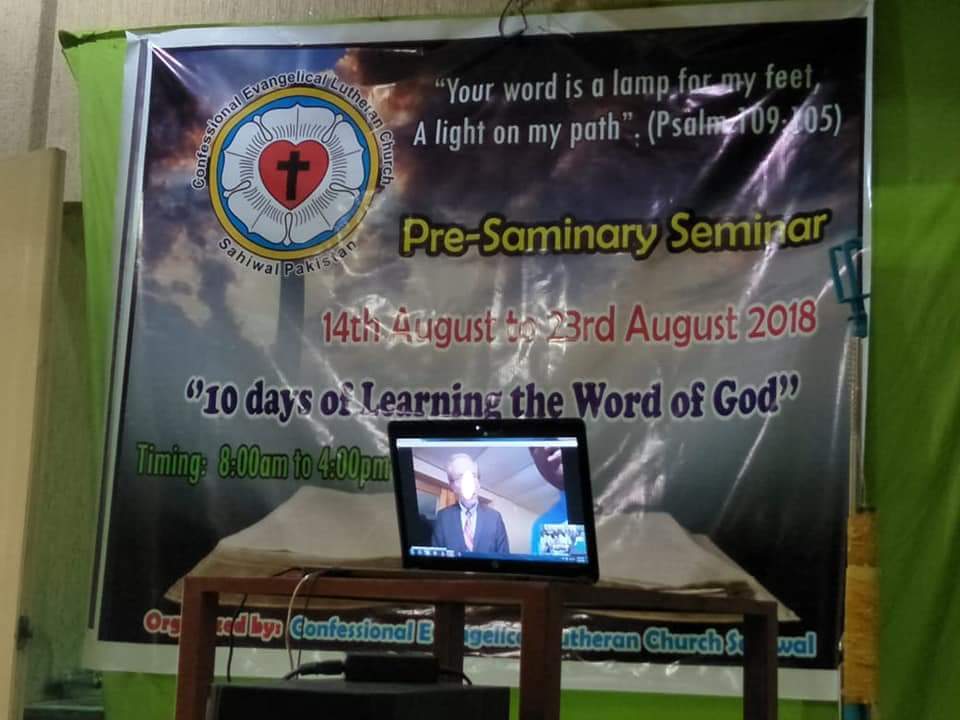 The "teaching laptop" stands before workshop banner
Translate this page into your language
Return to original language with "show original" button at top left.